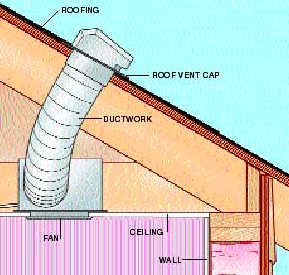 The Bathroom Ventilation System
Bathroom ventilation systems are designed to exhaust odors and damp air to the home’s exterior. A typical system consists of a ceiling fan unit connected to a duct that terminates at the roof. Ventilation systems should be installed in all bathrooms, including those with windows, since windows will not be opened during the winter in cold climates.

The fan may be controlled in one of several ways:

Bathroom ventilation fans should be periodically checked for dust buildup, which can impede air flow. Particles of moisture-laden animal dander and lint are also attracted to the fan because of its static charge. Homeowners should regularly clean dirty fan covers to prevent this kind of buildup.

The following conditions indicate insufficient ventilation in the bathroom:

The most common defect related to the bathroom’s ventilation system is improper termination of the duct. Vents must terminate at the home’s exterior.

The most common improper terminations locations are:

Improperly terminated ventilation systems may appear to work fine from inside the bathroom, so the homeowner or inspector may have to look in the attic or on the roof. Sometimes, poorly installed ducts will loosen or become disconnected at joints or connections.

Ducts that leak or terminate in the attic can cause problems from condensation. Warm, moisture-laden air will condense on cold attic framing, insulation and other materials. This condition has the potential to cause health and/or decay problems from mold, or damage to building materials, such as drywall. Moisture buildup also reduces the effectiveness of thermal insulation.

Mold growth is another undesirable consequence of improperly vented damp air. Even though mold growth may take place primarily in the attic and basement/crawlspace, mold spores can be sucked into the living area of a home by low air pressure, which is usually created by the expulsion of household air from exhaust fans in bathrooms and kitchens, and from clothes dryers and heating equipment.

Ventilation ducts must be made from appropriate materials and oriented effectively in order to ensure that damp air is properly exhausted.

The following tips are also helpful. Ventilation ducts should:

Should you cover your A/C unit for the Winter?
1 reply

Want to join the discussion?
Feel free to contribute!