Believe you me, as a technician working for the cable and phone companies, we went through roll after roll of underground cable during the month of April.  On more than one occasion, in addition to cutting the customer’s own cable line, they had also damaged electrical and gas lines.
It only takes a few seconds to damage a buried pipeline, but the consequences could last
a lifetime. Digging before having underground utilities marked puts you in serious danger
of injury or even death. But there’s an easy way to prevent that – just dial 811! It’s a free
call that can keep you and your neighbors safe.
April is National Safe Digging Month and the perfect time to refresh your knowledge
about safe digging practices. There is a vast network of pipelines, telecommunication
cables and electrical wires buried underground that need to be identified before
beginning any digging project to prevent injury, damage and service outages.
One phone call to 8II from wherever you are will route your call to Okie811 which will
alert owners of pipelines, telecommunication cables and power lines to mark their buried
assets within two full business days of the request. There’s no charge to you for this
service. You may also submit a locate request ticket online by visiting www.okie 811.org
or by downloading the Okie811 mobile app.
Whether you’re planting a tree, tilling soil, installing a deck or sprinkler system or setting
fence posts, always remember to call 811 at least two full business days before you plan
to dig to allow all utility line locations to be marked.
It’s easy to do. So during National Safe Digging Month, and any time of year, be safe –
call 811 before you dig. For more information about digging safety, visit the safety section
of the website at www.oklahomanaturalgas.comHome Run Inspections, LLC 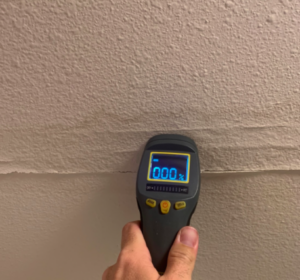 Moisture Intrusion left unchecked can lead to structural defects in a home over time, as well as health problems for the home’s family.

Some common moisture-related problems include:

Note that people who do not suffer from these ailments may still be harmed by elevated levels of airborne mold spores.

So now that we are entering the rainy season here in Oklahoma, take a few minutes after the next big rain and make sure you homes outer shell is doing its job.  Make sure your gutters are cleared and draining properly.  Make sure your downspouts are taking water well away from your foundation(we recommend 4-6 feet if possible.  Maybe you can add those gutters this spring that you have been meaning to for years.  Believe me they pay for themselves over time.

Check the indoor systems as well.  Bathrooms and Kitchens have a lot of water going through them.  Keep an eye out for moisture around showers and dishwashers.  Look under those bathroom and kitchen sinks.  Yes I know it may take a few minutes to clear all that stuff (I see it every work day-believe me), but as I found out not too long ago, all those products under there may keep you from noticing a leak that may cost you in repairs and impair indoor air quality.

As we crank up the A/C with the rise in temps and humidity, make sure your condensate drains are doing their job and taking the moisture to the drain.

Have a safe spring!

It’s that time of year again here in Oklahoma.  Storm season.  Hopefully we will get some much needed rain, but along with this we often get more wind then we would like.

I see this in most of my home inspections.  A lovely tree or bush has become a little to cozy with the side of a home and is causing damage to the exterior of the home as well as the roof.

Before the next weather event comes along, take a look around your abode and make sure there are no opportunities for your trees and vegetation to cause damage to your biggest investment.

A little prevention in the form of tree-trimming goes a long way toward keeping leaves and moss off your roof and keeping your roof damage-free. Abrasion from limbs and leaves that touch your home can eventually damage shingles, vinyl siding, and window screens, especially in high winds.

Overhanging branches also give squirrels and other rodents access to your roof. They can gnaw on your roof and siding. Branches need to be 10 feet away from your roof to keep these pests at bay. If that’s not possible, wrap the tree trunk with a sheet-metal bank to prevent them from climbing the tree.

Trimming branches that hang over the roof is a job for a pro, though, or you might cause more damage than you prevent.

Always think safety before starting a home project.  It’s often worth hiring a pro when you consider the cost of an injury.Home Run Inspections, LLC 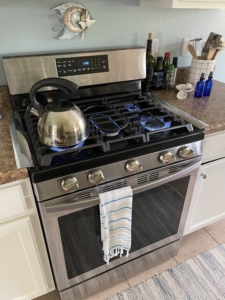 If you love to cook then you know using a gas range is great! Turning on a gas range cook top gets you an instant, constant flame that you can adjust visually – no wondering if it is on or off, hot or cold, or if it’s on the right setting.

The flames produced by a natural gas range cook top also cook food more quickly and evenly, because the flames spread themselves along the bottom and sides of the pan. For homeowners who really enjoy cooking, these are big pluses.

An often overlooked advantage to using a gas stove is the cost of operating it. If your home is already using natural gas – which off sets set up costs – your operating and energy costs will be lower with a gas stove than with electric.

Just remember that gas ranges by design are un-vented appliances unless you provide one.  They should never be used as a heat source and should not be operated with the door open.  We recommend that when using the oven over an extended amount of time, say around the holidays, that a nearby window be opened for fresh air, especially if the stove top vent hood does not vent to the exterior of the home.  If the oven is converted to LP gas, make sure the work is done by a qualified technician. 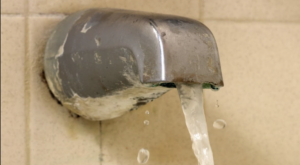 You know about these deposits.  I’ve lived in pretty much all the quadrants of the OKC metro and have always had to deal with hard water deposits.  Until I learned how to deal with it appropriately it was often an irritant as water flow was slow of erratic.

So if this sounds familiar, it’s time for a good cleaning.

To remove hard water deposits from your faucet, start by unscrewing the end of the faucet aerator.  These should be just hand tight and removable with a towel.  Take extra care if you have to use a tool and leave the towel between the tool and the aerator.

As you can see, there’s a lot of buildup on this one. Remove any rubber gaskets (don’t lose the pieces and pay attention to what order they assemble in the unit-VERY IMPORTANT).  Manually give the filter a good scrub with an old toothbrush under running water.  This will remove loose surface deposits.

Here’s the secret for removing the calcium and rust in a hurry.  Because calcium is an alkaline earth metal (meaning it has two valence electrons in its outer shell), it’s highly reactive with acids, like vinegar.  If we apply a little more kitchen chemistry, you’ll remember that chemical reactions require energy.  So – heat up enough vinegar (I usually use white vinegar for cleaning) to fully submerge the faucet filter.  Get it hot enough so that is uncomfortable to stick your finger it, not boiling.  Place the faucet filter in the hot vinegar, and watch it go to work.  See all those little bubbles?

Let it sit until it stops bubbling (I left mine in for an hour or so while I went and worked on other things).  Give it a good rinse and scrub with the toothbrush, and it looks almost like new.

If all goes well, the water flows the way it’s supposed to again, too.

The shower heads are often in much the same state.

If you have a flexible shower head If you don’t have a hand-held shower head, you can use a plastic bag and a rubber band to secure the vinegar around the shower head for soaking.

Scrub and rinse, and Ta – Daa!  Much better!  Now the shower doesn’t spray sideways past the shower curtain any more.

So let’s get this done before you sell.  A good home inspector will put this type of deficiency in his report and you will have to do it anyway, and it may be more costly if it’s put off too long.

If you are cleaning hard water deposits often, consider the very real possibility that all your plumbing is getting corroded.  Installing a water softener may very well be worth the investment in the long run. 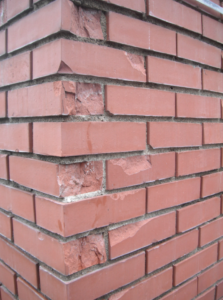 If you are noticing falling or missing bricks from your chimney’s exterior, your home may be experiencing a problem called spalling. Spalling is a common issue that can plague any type of brickwork from masonry chimneys to retaining walls and more. It is easily noticeable when small cracks begin to lead to bigger cracks as the brick surface deteriorates. To reduce the effects of spalling on your home, it is important to know not only its causes but also how to fix it.

Why It Happens
Spalling occurs in brickwork when moisture is allowed to penetrate it. The climate in which you live, your home’s architecture, and the exterior’s condition can all be factors in the impact moisture can have on the brickwork. Here are some things you should now about why spalling occurs and what conditions perpetuate it:

How to Fix It
When your chimney’s brickwork begins to show signs of deterioration such as cracking or crumbling, it is vital to resolve the problem quickly before it leads to larger problems. Hire an experienced sweep to inspect the chimney flue and brickwork to identify any troublesome areas. If addressed in the beginning stages, the technician can usually seal the bricks and crown and add a chimney cap for future protection. When the problem has been allowed to fester, the solution can be more complicated and time-consuming. Bricks beyond repair may need to be replaced or even a new crown may need to be installed.

Future Prevention
The key to successfully fixing a spalling problem is resolving the moisture issues causing it to occur in the first place. Applying a masonry sealant can help prevent further troubles as well as installing a quality chimney cap. Yearly chimney inspections are also important for early detection and the monitoring of trouble spots.